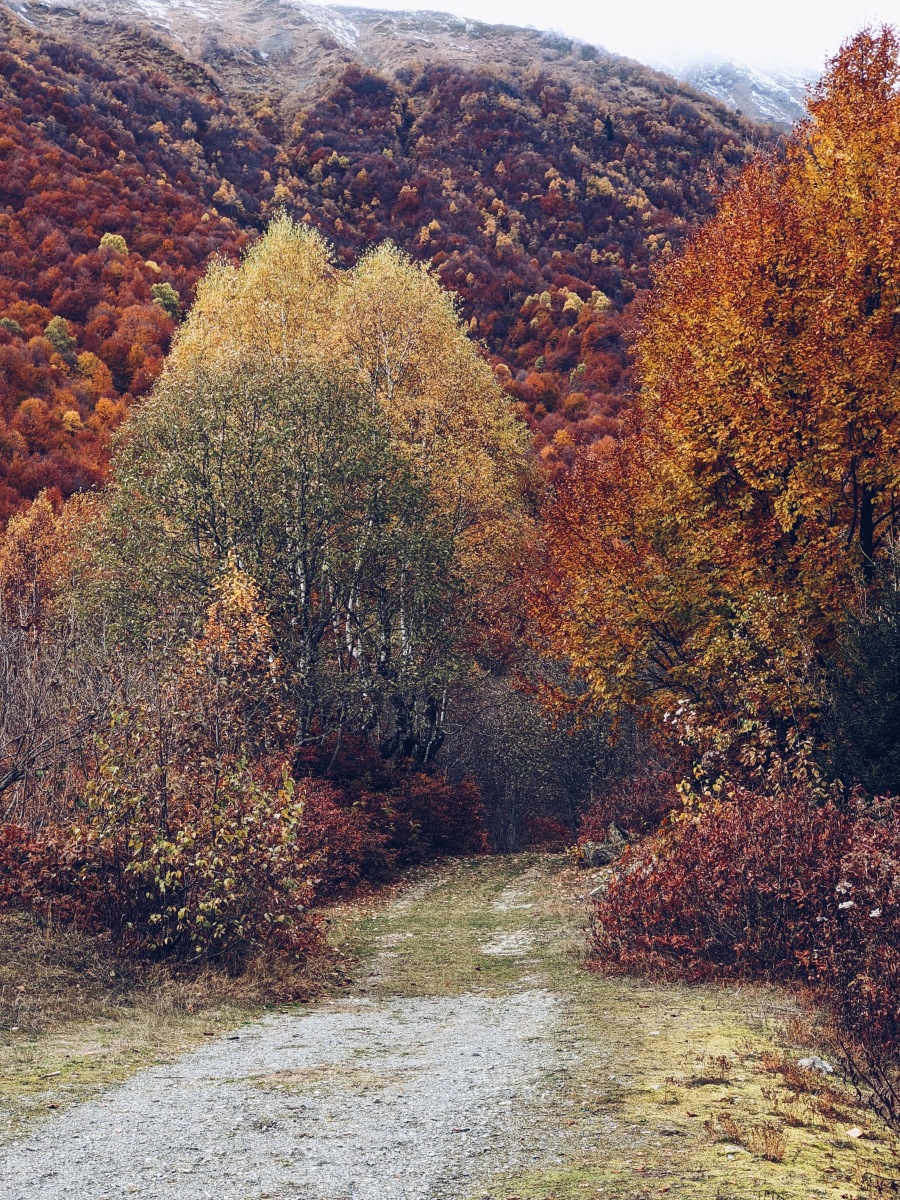 I caught the first glimpse of Racha’s indescribable fall beauty as the Delica meandered around the curves of the steep highway between Shkmeri and Oni. When I peered off the side of the road, I could see the Kheoni River stretched onwards through the valley below.

We departed Tbilisi at 6:30 that morning, but my travels began the afternoon before with a 6-hour marshrutka ride from Zugdidi to Tbilisi. Half the ride to Racha was backtracking the construction-riddled Tbilisi-Senaki-Leselidze Highway, but the scenery was of enough interest that I didn’t mind the repetition. This overnight tour was organized by the Georgia Expat Traveling Crew. I was looking forward to this trip; Racha is known for its cultural monuments and stunning landscapes. It’s dodged the busy tourism that visitors might encounter in other Georgian mountain destinations such as Svaneti or Kazbegi.

The first stop of the long drive was outside the village Ghebi, across the river from the Shoda-Kedela Range. Mount Lagora and Mount Shoda were covered in untouched snow, surrounded by a forest ablaze in autumn colors. The white peaks mingled with the clouds, sometimes making it difficult to tell where the mountains ended and the sky began.

From Ghebi, we traveled to Gona, passing a military post and getting as close as we could to the view of Mount Tsitela without meeting Russian border guards. We were denied visibility by the clouds hanging around the summit, but I thought it was the most impressive scenery we’d find during our weekend in Racha. We then journeyed about 20 km to the southeast, where we found Shovi, an abandoned Soviet resort. In the Soviet era, this area was known as “Georgian Switzerland” and was a popular holiday destination for the Soviet elite who enjoyed the mineral water springs and secluded hotels. One of the abandoned buildings is referred to as “Stalin’s abandoned summer house.” Although it was built for him, he never stepped foot inside. I was shooed off the balcony by a woman directing an informal iPhone photo shoot, but the decrepit house was safe to walk in and provided sweeping views of the surrounding forest.

We then turned back towards Ghebi to explore the village. At the center are the Matskhovari Church and a view of the mountains that tower over the town. After a quick walk around, we arrived at Relax Guesthouse in Oni. That evening, we enjoyed some beers around the firepit while our guides grilled mtsvadi. We were treated to a proper Georgian guesthouse dinner, meaning that passing a plate required a game of Jenga because dishes were stacked on top of one another, precariously balanced to make room for the continual arrival of more and more food.

We had a really wonderful dinner that evening and drank our fair share of the guesthouse’s wine and liquor. The next morning, after lots of water and a hearty breakfast, we continued the tour. First, we visited Barakoni, an Orthodox church in a village called Tsesi, near the town of Ambrolauri. The highlight of this church visit was actually a litter of puppies that followed us around the church and graveyard grounds. Next, we stopped to taste the wine produced in the Racha region at Wine House Khvanchkara. It’s a soft red wine and tasted sweeter than a lot of the Georgian reds I’ve tried. Matt and I even got to try on traditional clothes!

After our short stop, we continued to the Sakinule Cave near the village Nikortsminda. We took a short walk through a grove of golden aspens before reaching the cave’s entrance. I walked down into the cave with a few other people – it was freezing inside and its expansive emptiness creeped me out. From the cave, we finished our journey by driving around the Shaori Reservoir and stopping for lunch at Shaori Resort. Our guides encouraged us to try the local ham Rachuli Lori and it was delicious.

Our last stop was a short hike to the Tskhrajvari overlook, located near Nakerala Pass. We didn’t have time to do the entire hike, but stopped close to the top and still had the “overlook” experience by walking out onto cliffs with steep drops on all sides! We had a long drive that put us in Tbilisi at around 10:30 pm. Our guides stopped halfway in a town called Surami for stacks of warm, fresh sweet bread loaves called Nazuki. Flavored with cinnamon and raisins, it was the perfect roadside snack and the leftovers made a great breakfast the next morning!

I think fall is the perfect time to visit Racha. I do hope to return in the late spring to explore the mountains, but feel very lucky to have experienced the rich colors that enveloped the landscape.